As we approach the end of this year, we take time to contemplate the successes of our organization. Classical Music Indy’s President and CEO, Molly Deuberry Craft, writes that 2016 was “a notable year.” Read below to see all that CMI has achieved this year in the name of music. Happy New Year and best wishes for 2017!

It’s hard to dispute that 2016 was a year that will stand out in history for many reasons: President Trump, Brexit, and Ryan Lochte’s embarrassing escapades in Rio during the Summer Olympics, just to name a few. At Classical Music Indy we see 2016 as a notable year for less controversial reasons. As we reflect on this year, we celebrate expanded programming for our faithful radio listeners and the launch of our in-person reach into the Indianapolis community. Classical Music Indy provides quality classical music content for four radio stations in Indiana: WICR 88.7 in Indianapolis; WBNI 94.1 in Fort Wayne; WNIN 88.3 in Evansville; and WBAA 101.3 in West Lafayette. Though each station determines how many hours of Classical Music Indy’s programming they put on the air, we now offer them 14 unique hours of programming every weekday. This expanded programming increases the options for our communities around Indiana to access top-notch classical music on the radio, hosted with the unique perspective of well-respected long-time host, Michael Toulouse. In addition to our radio programming, Classical Music Indy created a suite of community-based programs in Indianapolis that are provided free of charge to audiences. Our AfterSchool Indy program visits schools in underserved communities, using a well-structured curriculum based on education standards to give children an interactive experience with classical music. Our Senior Concert Series takes live performances into senior living facilities, creating an experience that encourages socialization, limiting senior isolation. But these community-based programs aren’t just for children and seniors. In addition to hosting occasional community-wide concerts open to the general public, our Random Acts of Music series has created unexpected joy in the most unlikely places. Whether in the lobby of Eskenazi Health, the parking lot of the Haughville Kroger, or a street corner in Broad Ripple, these pop-up concerts attract large clusters of people who pause to enjoy the unusual experience. In this inaugural year, these community-based programs have reached over 4,000 people. We look forward to expanding that reach in 2017.

We are grateful for the support of our listeners, our community partners, and our board and advisory council members. We could not do this important work without generous support from the philanthropic community, including the Christel DeHaan Family Foundation, the Allen Whitehill Clowes Charitable Foundation, the Nicholas H. Noyes Jr., Memorial Foundation, the Indianapolis Foundation, the Central Indiana Senior Fund, National Endowment for the Arts, Indiana Arts Commission, and the Arts Council of Indianapolis. We count on you and your support makes a difference.

Happy New Year. May 2017 be a year filled with peace, passion, and persistence as we pursue the greater good. 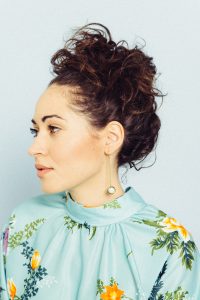 As we wrap up our Women’s History Month programming, we feature music this week by composer and vocalist Hanna Benn. Benn’s multi-disciplinary approach has incorporated dance, opera, and theatre — submerging boundaries and discovering new sonic landscapes in the process.