This week we asked Classical Music Indy’s own Program Director, Michael Toulouse, to reflect on emotions in music. Read below about the long history of music describing human expression, and how though our modern attention spans have shortened, music can almost instantaneously evoke a feeling.

It’s a shame that Twitter has upped its character limit. Although you can now speak your mind on a sprawling canvas of 280 alphanumerics, punctuation marks, and emojis, all you really ever needed were four letters and a link. The word “MOOD”, accompanied by an image of a cat, a superhero, or a smirking Rhianna, told your followers all they needed to know about your emotional state. A mood meme is even better when accompanied by music, but be advised: there’s nothing trendy about that. Composers have been loading their creations with emotional freight for centuries.

The freight itself has been around even longer. In the fourth century B.C., Plato identified a set of basic affections, or emotional states–happiness, suffering, desire, and fear–which could be expressed in the fine arts. Plato’s pupil Aristotle parceled human emotions into eleven separate categories, each on its own pleasure/pain axis. (You get the sense he would have been just fine with 280-character Tweets.) The Greek philosophers’ ideas paved the way for the Roman rhetorician Quintilian, a few centuries later, to draw a parallel between the inflections of speech and the contours of music.

The thinkers of antiquity were not doers–not in the musical sense, at least–but there was no reason for them to worry. Western music eventually came up with its own practical implementation of the Platonic/Aristotelian ideal. The modes of Gregorian chant, ancestors to the major and minor keys still in wide use today, lent themselves to classification on the emotional spectrum. And in the Baroque era, basically from 1600 to 1750, composers and theorists such as Johann Mattheson and Johann David Heinichen took Plato’s original concept to its ultimate, rigorous conclusion: the Doctrine of the Affections. 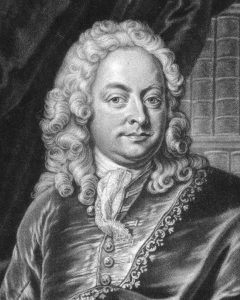 In Mattheson’s world, music was like cooking. Each new suite was a menu of delectable emotional extremes. Every composer was a hopeful sous chef. And he, as the expert guide in this area, was Julia Child. He described his theories in great detail in Der Vollkommene Kapellmeister (The Complete Music Director), a 1739 how-to manual showing the best ways to evoke sensations such as joy, sadness, anger, and bullheadedness.

Mattheson was all in when it came to the affections. In his opinion, an expert music director internalizes the doctrine, getting to know all the emotions as well as someone with firsthand experience. A musician who has not acquired intimate knowledge of strong passions is unable to arouse those same passions in others. Few would have questioned Mattheson’s own familiarity with certain passions; he once almost murdered his friend George Frideric Handel over a dispute during an opera performance.

Although Handel and Mattheson apparently didn’t see eye-to-eye on everything, it’s clear that Handel had no problems with the ideas Mattheson espoused. He was perfectly happy to break his music up into separate movements, each with its own specific mood. Sometimes, as in the case of the Utrecht Te Deum, the text itself called for that episodic approach.

A system as rigid as the Doctrine of the Affections, with its objective definitions for everything, was not the perfect fit for an art form as subjective as music. In time, composers began to reconsider the idea that they simply trafficked in abstract commodities clinically defined as emotions. By the mid-18th century, some of them even dared to believe that their own feelings, which they knew through personal experience, were equally (if not more) valid. The concept of immediate expression became the new ideal, and it dominated musical aesthetics for the next hundred years.

As musicians continue to explore the depths of human expression, one can’t help but wonder where music will go next. With the advent of the Internet and social media, our consumption rate of information has increased while our attention spans have decreased. Will the ideal musical expression of the 21st century be defined as hyper-immediate or will there be a reaction in the opposite direction? Does Twitter’s new limit signal a trend toward longer, more elaborate forms of expression, or will we always love our mood memes? It may take even more than 280 characters to answer that particular question. Michael Toulouse is the Program Director and the host of Classical Music Indy’s signature program, Classical Music with Michael Toulouse. He has a B.A. in music from Saint John’s University in Collegeville, MN and continues to play piano and study foreign languages for his own pleasure and artistic growth. He first hosted a classical music program in 1987 on WBNI in Fort Wayne, Indiana. He was a 2006 Spectrum Award recipient from the Indiana Broadcasters Association. Michael was appointed Classical Music Indy’s program director and primary host in 2008. One of Classical Music Indy’s …